Working on my child’s Islamiat assignment, I came across one very interesting story. For those of you who would like to know the origins of the Adhan and its beginning, must read it along with their kids (if any). My children just loved it, they could exactly imagine in their little minds what happened in Medina hundreds of years ago.

Also, looking for a bedtime story for kids? An Islamic themed bed time story? Then read this aloud to your kids at bedtime…. 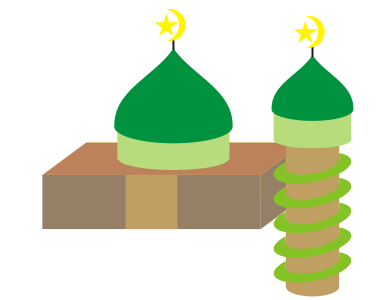 The streets of Medina were full of people. Men buying and selling goods in the market, women busy in household chores, little boys playing outside their homes, wayfarers trotting along the path… activities were being carried out as they are in streets everywhere. There was noise and mayhem and people were totally engrossed in their tasks and discussions.

When suddenly, they all stopped. Men and women, little boys and girls, the wayfarer and the merchants, all stopped and stared.

They dropped what they were doing.

They started looking towards the mosque.

They could hear something.

Hear the beautiful, very beautiful sound of Bilal (May Allah be pleased with him) calling out “Allah u Akbar”. That was the first time they had heard the Adhan and they rushed towards Masjid-e-Nabawi to offer their obligatory Salah.

Muslims in Medina had been increasing day by day and they were busier in trade and agriculture and had spread to far off distances.  In the second year of Hijrah, a person  announced in a loud voice, before each obligatory Salah, “As-Salat ul-Jamiah (the Salah for Jama’ah is ready)” so that people would hear the call and would come to join the Salah. Some Muslims could still not be informed at all for they would be at further discances from the mosque.

Now the need raised for some kind of a reminder to remind the people of Salah.  Prophet Muhammad (P.B.U.H) thought about it and asked his companions for their advice. Some companions suggested that the Muslims should blow a horn, some suggested ringing of a bell in front of the mosque and some suggested kindling a fire. Prophet Muhammad (P.B.U.H) was not satisfied with those ideas and he waited to hear a better idea or to receive guidance from Allah.

Abdullah bin Zaid (May Allah be pleased with him) was a close companion of Prophet Muhammad (P.B.U.H) and he came to him and said,

“O Messenger of Allah! I had a beautiful dream last night”.

“What was the dream you saw?” Prophet Muhammad (P.B.U.H) asked him.

“I’ve seen a man wearing green garments who taught me the words of the Adhan and advised me to call people to prayer with these words”, he replied. He then recited the exact words and verses of the Adhan. Subhan Allah!

Hadhrat Umar bin Khatib (May Allah be pleased with him) also came and said: “O Messenger of Allah, an angel taught me the same words in my dream last night.” Prophet Muhammad (P.B.U.H) at once recognized that the dream of Zaid was true and it was a form of guidance from Allah.

He asked Zaid to teach the words of Adhan to Bilal (May Allah be pleased with him), who then stood up and called the Adhan. That was the first time in the history of Islam that the Adhan was called out.The beautiful voice of Hadhrat Bilal (May Allah be pleased with him) echoed all over the city of Medina.and people were amazed to listen to such a wonderful call for prayer. They came running to Masjid -e- Nabawi to offer Salah. How very delighted they all were!

And most delighted of all was our Holy Prophet Muhammad (P.B.U.H) who accepted this Adhan as the official call to Salah. Since then, till today,the Adhan is said in the same manner five times each day before every obligatory (Fardh) Salah.

4 thoughts on “The Beginning of the Adhan”